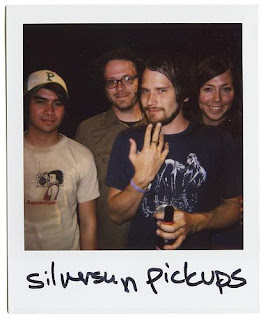 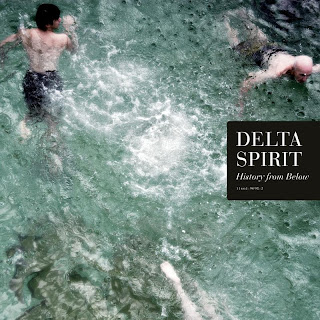 to be released on 08 June, the band's sophomore LP will be called History From Below and will feature:

worth watching again, I think, because there has been so much negativity lately about the postponed Strokes IV release. I am very okay with waiting for something worth waiting for.
Posted by Hanan at 2:30 PM 1 comments

Band of the Week: Mother Falcon 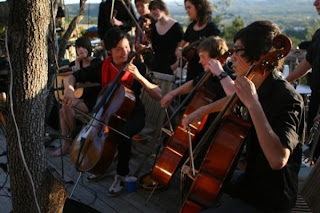 Sometimes it’s difficult to pick out similarities within musical subgenres. Chamber pop artists such as Arcade Fire, Sufjan Stevens and Beirut are constantly grouped together, but the musical relationships between them remain elusive. This all changes when a band like Mother Falcon comes into the picture.

They have an EP called Still Life out which you can get on cdbaby.com

keep tabs on their tour dates via MYSPACE
Posted by Hanan at 9:34 AM 2 comments

rain everywhere. this song is redeeming, somehow.
Posted by Hanan at 9:33 AM 1 comments 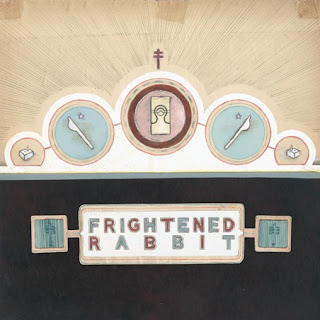 Albums like Frightened Rabbit’s 2008 release The Midnight Organ Fight come along once in a blue moon, cutting like a knife and drawing more blood than you thought you contained. The problem arises when the band goes back to the drawing board, having perfected the craft of tapping into your innermost demons, because, inevitably, they will falter.

If The Midnight Organ Fight is a splendid Samurai sword, The Winter of Mixed Drinks is a wooden dagger. There is a lot of unrealized potential and you are left with something which doesn’t quite accomplish its purpose.

It is not a bad album by any stretch of the imagination, but if it had been released as the band’s debut, I doubt it would have generated half the amount of buzz as its predecessor. It is noticeably less heady than Midnight but ways away more advanced than Sing the Greys. It delivers like an elongated EP, song after song of musical sketches that don’t contain the same ground shifting gusts as the band’s brilliant sophomore release. 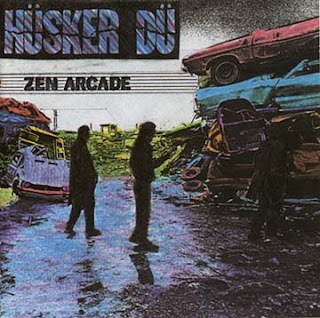 it's all about the noise rock, yo. a little punk in San Diego told me about this band and I am hooked.
Posted by Hanan at 7:49 PM 0 comments 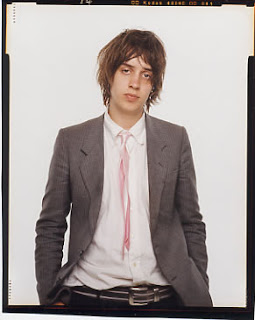 "There was a part of me that wanted so badly for [the Strokes] to be the best band around; that was my entire focus," he said. "I understand now that it can be good to work outside the circle."
Posted by Hanan at 7:47 PM 4 comments 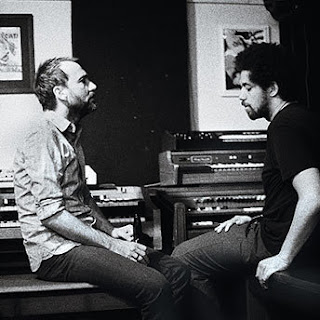 holy smokes. two of my favourite records of 2010. at the Regency.
curaaaaaazy.

* with the Morning Benders

the morning benders - waiting for a war (daytrotter) [mp3]
Posted by Hanan at 12:03 AM 0 comments 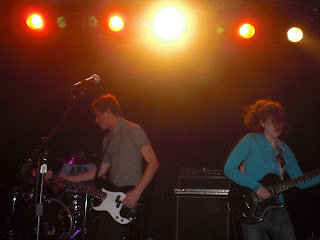 Punk music is associated with many things, but morality is not always the first that comes to mind. The essence of punk, however, lies in a rejection of the undesirable conventions of society, whatever they may be. Titus Andronicus' SF show last Sunday strayed away from normative punk elements in so many ways, down to the promptness of the band, their early finish and lack of encore before closing up shop, but it was a punk show regardless. 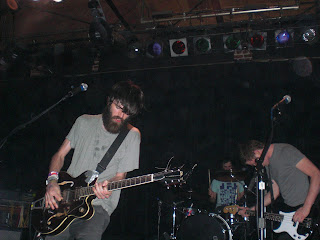 It is fittingly punk that Titus Andronicus are here to revive a sense of ethics within us all. Early on in the night, Patrick Stickles (lead vox, guitar) declared “Fuck the devil. Fuck evil. Do only good,” succinctly summing up the band’s persona. Patrick’s songwriting nods heavily to what he told me was “the most ethical band of all time”, Crass. He even has their logo tattooed on his right arm to remind himself of the importance of doing good with his dominant hand. 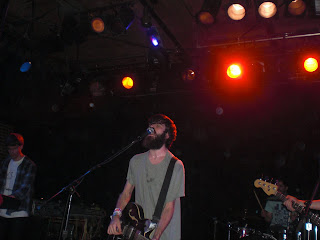 The real star of the night, however, was Amy Klein, who spat out rambling guitar hooks and dumbfounding electric violin solos. Drawing inspiration from girl punk bands and noise rock like Vivian Girls, she transformed her childhood music lessons into something truly remarkable on stage. 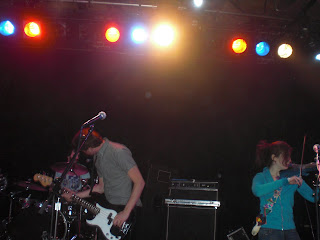 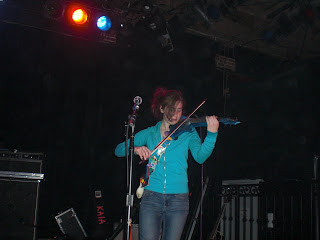 The rest of the band performed admirably while Patrick grappled with tension induced by his SSRI medication for his anxiety and heightened sensitivity. He confided in the audience about his apprehension and then proceeded to perform a heartwrenching version of “No Future: Part 3: Escape from No Future”. 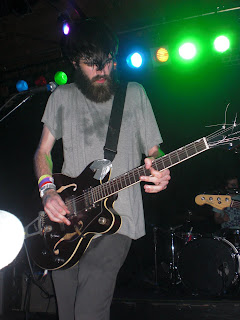 So many mysteries were unraveled on stage and after the show, down to the band’s moniker. According to Patrick, they chose to name themselves after the lesser known Shakespearean play because they feel that, like the play, their music grapples with reconciliation between the cerebral and the visceral elements of choice in this world. Right on.


you can see me raise my arms to take a picture at :06 XD

This band has so much damn integrity and, more than anyone out there today, deserve to be heard and seen and loved. Check them out.
Posted by Hanan at 11:31 PM 2 comments 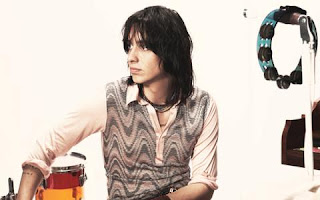 HOLY SHIT JULIAN GOT INTERVIEWED BY AN ACTUAL FAN.

intelligent questions. in depth analysis. I dig it.

he sings to his baby. if that isn't the most precious thing ever, I don't know what is.

The Henry Clay People sign to In Rainbows label 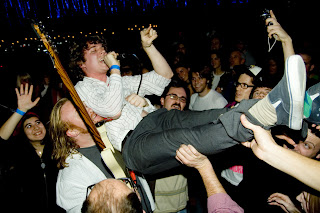 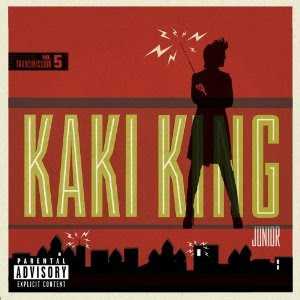 Kaki King broke into the mainstream in 2007 through her stunning contributions to Eddie Vedder’s Into the Wild soundtrack. Her guitar creations cannot be reduced within the bounds of the measly six strings from which they dissipate, as her signature brand of experimental music uses the instrument in fresh and varied ways—most notably as an object of percussion.

On her latest album, Junior, Kaki King finds her voice (quite literally) in a more straightforwardly rock direction. There is a notable shift from her previous work: there are fewer instrumental tracks and much more emphasis on King’s strengths as a vocalist.

At times, the guitars and vocals are airy like Pink Floyd (“Spit It In My Mouth”), elsewhere, more aggressive drums are followed by siren guitars (think early Foo Fighters). There are definitely nods to Pearl Jam, probably as a direct result of King’s collaboration with Vedder.

This album is interesting not only because of King’s mastery of the guitar and her innovative approach to songwriting, but also because it is truly unlike any other form of contemporary music. It doesn’t fit into any of the popular indie subgenres (post punk, surfer rock, lo fi). It finds its strength in a steady diet of 90s alternative rock but also incorporates experimental sounds. “The Hoopers of Hudspeth” even hosts a seductively subtle horn section.

King ends the album on a bitter note, in a ballad to a bad breakup called “Sunnyside”. The honesty found on this track is empowering by virtue of King’s openness about her lesbianism, but it will resonate with people of all sexual orientations. King explained “I’m hoping there’s something universal in that song that someone’s gonna listen and think ‘Wow, I can relate to that’ because I don’t want it to be my pity party.” Mission accomplished.

the album drops on April 13th, you’d be well advised to check it out

hot damn. I like that Julian's wardrobe is getting more casual. I'm still holding my breath for the shirt to return.
Posted by Hanan at 9:18 PM 2 comments

It is a rare luxury to be in the presence of a lady frontwoman who can really rock. Odds are, they will underwhelm us and our insatiable thirst for thrashing sound and bravado. That being said, Wednesday night at Oakland’s Fox Theatre was a mixed bag in the badass department. The night started off extremely strong, with LA’s Nico Vega absolutely killing it. So much noise was made by a measly three people, and the glittery-clad lead singer Asia captivated the audience with her intense vocal deliveries, spasmic dancing and passionate interaction with the band’s guitarist. At one point, she had thrown herself on the floor of the stage and looked as though she was experiencing some sort of sexual ecstasy through the music. Most of the songs were loud and powerful, abundant with declarations of fearlessness and independence, but they managed to fit in a couple of more delicately brooding tunes in their spellbinding raucous set. The crowd was chanting along to songs they had never heard before, and spirits ran high as Nico Vega set forth their plans for world domination through music. 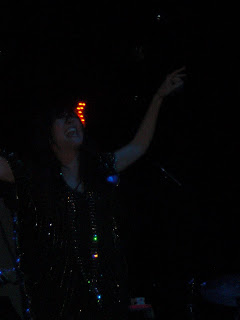 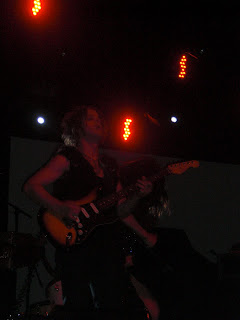 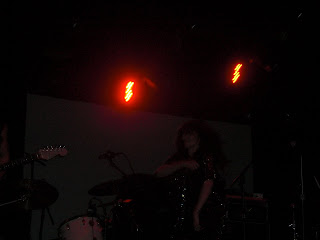 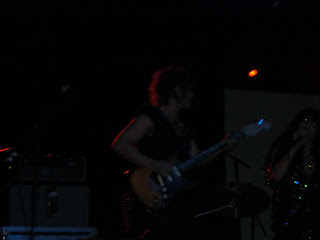 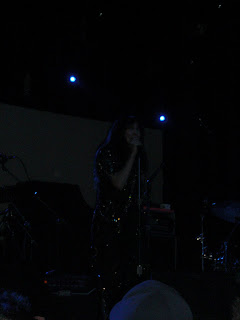 The second opener was called Codeine Velvet Club and it also featured a female leading lady, but collaboratively, as there was a guy singing lead vocals at the same time. The band, which had horn sections and classic guitar riffs, had a great 50’s feel, but with a bit of an edgy hard rock twist. They weren’t spectacular, but they weren’t half bad. Unfortunately for the audience, however, the night’s trend of declining musical excellence carried on to the headlining slot, Metric. 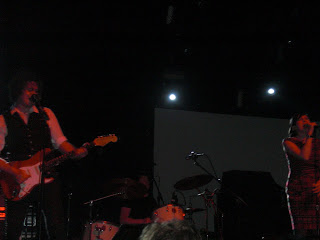 Emily Haines has a voice for studio. It was not fitting for such a big venue, but I can’t imagine it working well at a smaller club either. Everything was very internalized, because she does not project her voice whilst singing, a real problem for the live experience. The rest of the band delivered a very run of the mill musical backbone, there wasn’t much improvisation or quirkiness in the air. Emily danced around stage a bit but it did not make up for the flat sound that coerced me to do something I rarely ever do, and leave midway through the band’s set. When it came down to it, even the band’s mesmerizing singles did not translate well on stage. Or even translate at all. 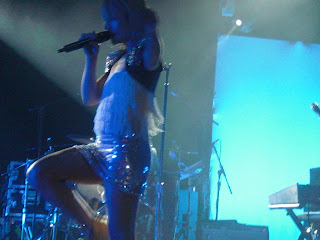 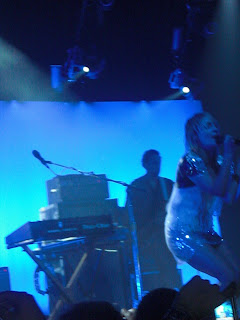 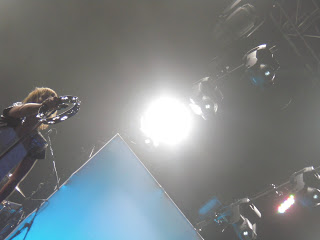 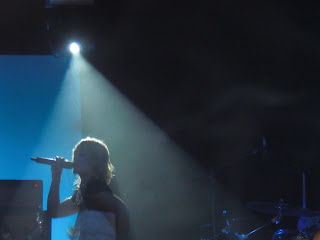 song of the day: Kaki King - Doing the Wrong Thing 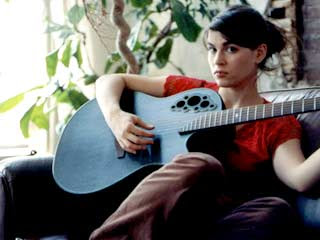 today, I decided to post this song whilst listening to my favourite contemporary experimental guitarist...when I came home, I was delighted to see a promo copy of her new record in my pile. I'm listening to it right now and really loving it. a review is forthcoming.

Kaki King is almost exactly the same age as Julian. their birthdays are a few days apart. a pretty cool coincidence if I do say so myself.
Posted by Hanan at 1:38 AM 0 comments

watch "Country Disappeared” performed in the streets of Montreal below

Wilco - Country Disappeared - A Take Away Show from La Blogotheque on Vimeo.

like whoa. Canada's cool factor just shot through the roof.
Posted by Hanan at 12:58 AM 0 comments

Visit msnbc.com for breaking news, world news, and news about the economy

Kaiser Chiefs - Flowers In the Rain (The Move Cover) [mp3]

1. Intro
2. Between Love & Hate
3. I Can't Win
4. Under Control
5. When Dogs Get Embarrassed (ft Regina Spektor)
(this is Modern Girls & Old Fashioned Men, and a damn good version of it if I do say so myself)
Posted by Hanan at 9:47 AM 6 comments