“Do you realize that everyone you know someday will die?”

Flaming Lips + Edward Sharpe and the Magnetic Zeros + a cemetery:
Posted by Hanan at 10:46 PM 0 comments

Labels: edward sharpe and the magnetic zeros, the flaming lips

must watch video: Arcade Fire perform "We Used to Wait" for a Chicago radio station

Arcade Fire performs "We Used To Wait" on Sound Opinions from WBEZ on Vimeo.

Win sounds so good here. his voice is delicate and perfect.
Posted by Hanan at 10:40 PM 0 comments

via Consequence of Sound:
Fucked Up's Damian Abraham interviews Win and Will Butler. They talk about how much their home influenced them and their slow but steady rise to fame. Watch that and much more in the twenty three minute documentary below:
Posted by Hanan at 8:59 PM 0 comments 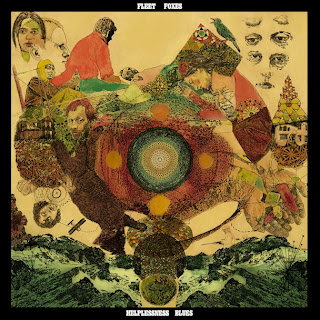 Never a fan of Fleet Foxes’ debut album (I love their live sound but didn’t enjoy the recorded versions of their music), their second album, Helplessness Blues, took me by surprise. The album, which incurred many losses from the band (financial, emotional, personal), is absolutely stunning. It garners lush sounds, perfect harmonies and, oddly enough, sharp lyrics from frontman Robin Pecknold, who struggled a lot while writing this album. When he sings: "What makes me love you/what do I see in your eyes--besides my reflection", you can just hear heartbreak in his voice.

Helplessness Blues flows beautifully, a result of the band’s tried and true efforts to record everything at once, flaws and all. The two songs with slashes in their titles ("The Plains/Bitter Dancer" and "The Shrine/An Argument") remind me the most of Simon and Garfunkel, weaving gentle yet gripping stories of love, loss, and the mingling of souls. The latter song contains a very avant garde horn solo which is kind of off putting at first but it’s one of the most memorable bits of the album, and it grows on you.

“Bedouin Dress” has a very old time folksy violin part which I love. When overlooking the oft-harsh lyrics, the entire album is very peaceful and calm--like something you'd play for your child if they were sick.

“Grown Ocean”, one of Fleet Foxes’ most musically ambitious tracks, closes Helplessness Blues perfectly by looking to Sufjan Stevens for inspiration. Pecknold sings as if he is completely at ease on a beach coast, and the song’s soft, steady percussion is the icing on the cake. That is, if cakes could be made with granola and twigs...

holy wow
head over to The Strokes News to watch the entire gig and download the entire concert (in mp3 form) HERE (I uploaded the zip file, it's safe)
Posted by Hanan at 12:42 PM 6 comments