this YouTuber so kindly captured nearly every song in the set with GREAT AUDIO
Do you want to lose fifteen pounds in 24 hours? It’s simple, just follow these steps exactly.
1. Wake up at an un g-dly hour to hop in your car and pick your brother up. Drive 550 miles from the Bay Area through the California/Nevada border to get to Las Vegas, city of entertainment. Pass through Mojave Desert, yell at squirrels.
2. Wait in line for 6 hours, get ushered in by rude staff toward line. Craftily bring your 17 year old brother to the 18+ show in the Chelsea Ball room, now converted with a stage to a concert venue on the fourth floor of the Cosmopolitan Hotel. Stand in the second row and realize that your younger brother is slowly drifting rows and rows behind you by rude and selfish concert goers.
3. Stand on your feet for two hours before opener Devendra Banhart comes on, listen to his band's short but sweet set (winding down at 10PM), in anticipation that The Strokes will be on soon. Then wait until 11PM for the headlining band to get out. In the process, enjoy being yelled and pushed and grabbed at by rabid Strokes fans, nearly all having traveled from far away places to see this great band.
4. Be grumpy, yell, mutter to yourself that this is the last time you try to be up front at a Strokes show and yell some more.
5. Be amazed by band in question, sweat your ass off, find yourself fifteen pounds lighter. Decide that all other ways of spending your time are fruitless, and start plotting your way to becoming the Deadhead equivalent of a Strokes fan (and eventually heroin-chic). 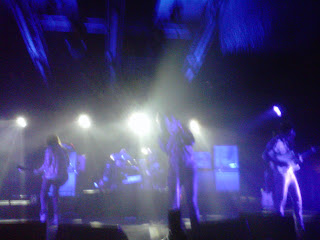 There’s something different about being at a Strokes show. People get there good and early, and nearly everyone breaks the cardinal rule of “don’t wear a band’s shirt to their concert”. You can talk and talk about The Strokes for hours with complete strangers who not only understand your (un?)healthy obsession with the perfection that is The Strokes, they reciprocate enthusiastically. People might push and shove and be taken out of the crowd from fainting, but at the end of the night, everyone is so elated that nothing else matters. 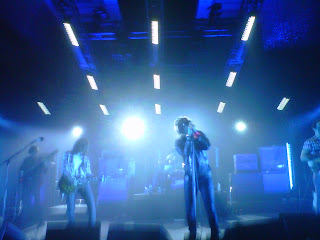 Last night, the Strokes played their first show in support of Angles, in . What the night ended up being came nothing short of monumental. Fab and Nikolai, I'm looking at you. You two were tight as hell last night.

While most of us guessed that the band would open up with a new song or a familiar single, The Strokes kicked off the night with “I Can’t Win”, which was shortly followed by Julian bantering about how a lot of people in the room hate him, and things being out of his control. Was he talking about Angles or the extreme lateness of the band or both? It doesn’t matter. Because Julian Casablancas is one fifth of the greatest entity on earth, and he does not need to justify anything to anyone ever. And “I Can’t Win” is a good way to sum that up. 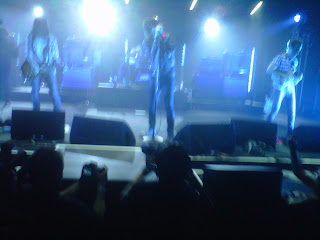 But the music the music the music. The band played four of the five songs which fans have heard and loved by now, including “You’re So Right”, “Taken for a Fool” “Life is Simple in the Moonlight” and the sweet as candy lead single “Under Cover of Darkness”. They did all of this during the first hour of the show, which Nick Valensi dominated by and far. Almost all of the songs (excluding “Under Control”) were Nick’s lead guitar songs, and he even brought a nifty spin to the beloved “Someday”. The spotlight on him was undeniable, especially during the mind boggling solos in the new songs. 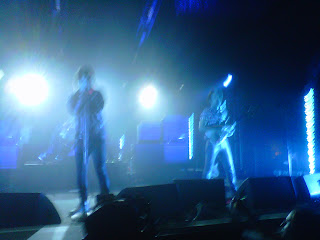 Am I saying that The Strokes have become a polarized group, deifying a couple of members at the expense of the rest? No no no no no no no. Even though I know that a lot of people dislike “You’re So Right” (written by Nikolai but surprisingly with backup vocals from Nick), the live delivery of this song was stunning and powerful. I would go so far as to say that it was tied for best with “Life is Simple”. The newer songs all came off wonderfully live (least of which, however, "Taken for a Fool", although I do take partial responsibility for it not meeting my expectations, as I listened to the studio version way too much). I also do have to admit that the band needs to work on perfecting the sound quality coming from the amps for those songs, as they previously did with FioE. But back to my original point. The Strokes' long awaited fourth record (due out next Tuesday) is called Angles because supposedly they all contributed to it and it’s the beginning of a new era and yeah yeah yeah. But this is not supposedly true. It is absolutely true. The band’s dynamic during the set exemplified this. None of them overpowered any of the rest. 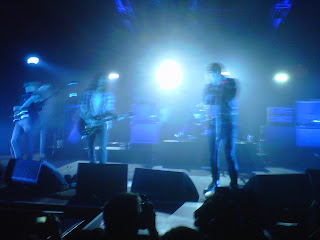 But wait, what about Nick? Didn’t he hog the spotlight? Let me just say this much. Nick, by sheer numbers, has more solos than Albert does. Nick’s contributions to Angles so far have been incredible and his mastery at playing the guitar continues to baffle me daily. But that’s not the point. The point is:

Nick might have had all eyes on him during the show, but Albert had all of the last glances. 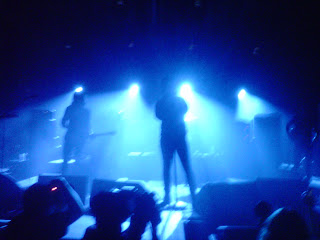 The Strokes’ first encore song (after the smashing closer “Take it or Leave It”) was “Gratisfaction”. A brand new song. A brand new song with a new solo from Albert. And backing vocals from Albert (and Nick too). The song sounds like a Strokes version of a happy song from yesteryear. It’s light and effortless and magical. The most happy go lucky song I've ever heard from them. "Gratisfaction" is like a more badass version of Albert’s solo material, with Thin Lizzy and other 80's influences mixed in to a perfect vocal chorus by Julian. Nick’s guitar work might have driven and dominated the set, but Albert rocked the house down with TioLi. Three of the four encore songs were Albert's songs, including the rolicking "Last Nite", which ended the set. As the night was winding down at 12:15 AM, Albert looked toward Julian and grinned. He kept grinning as he played the solo in “Last Nite” really high in his arms. He was so happy. They all were. 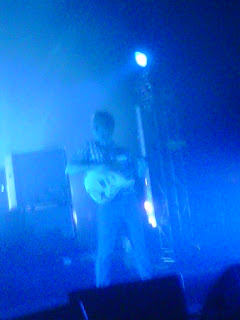 Devendra Banhart called this band an amulet. I cannot emphasize how perfect that anology is. 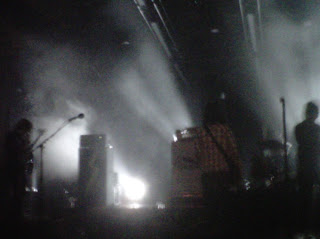 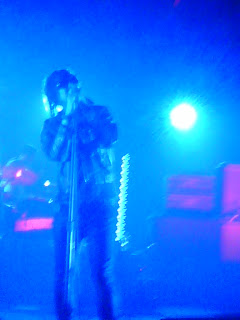 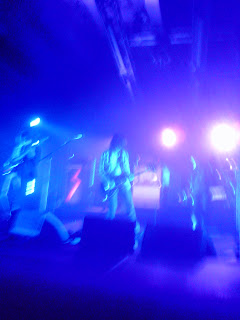 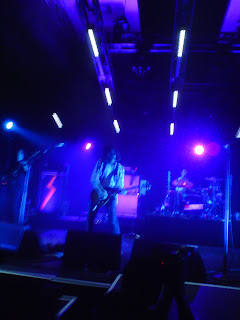 Set List
I Can’t Win
Reptilia
Under Cover of Darkness
The Modern Age
Whatever Happened?
Under Control
New York City Cops
You’re So Right
Is This It
Juicebox
Someday
Taken for a Fool
Hard to Explain
Life is Simple in the Moonlight
Take It or Leave It

Gratisfaction
Automatic Stop
You Only Live Once
Last Nite 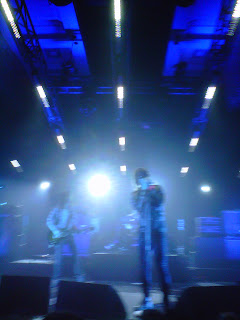 My camera broke a couple of weeks ago and the replacement still hasn’t arrived. I took pictures with my phone but only a few turned out well and then my phone died. I’m so sorry I didn’t get any video, I didn’t have enough power on my phone, and as I said, my camera with the divine audio quality is in the process of being replaced. 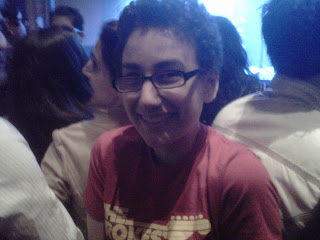 What a great review, with all the little details fans care about. Can't wait to see them performing Angles live, hopefully soon.

Great review....I love your blog so much

Fantastic review. I know all to well the feeling of loosing a million pounds at a show. Glad you had a blast and sorry about a terrible crowd (this happens way to often) I hope their set times get longer during the tour. I don't think they have enough time to play all their gems.

great review. i absolutely love You're So Right, and i had no idea it was a Nikolai composition. the bridge section is fantastic, the panning really works and the dissonant intervals in the vocal harmony work perfectly. so far it's my favorite new one.

Glad you had a good time a thank you for your review. You did a good job here.

Hanan, I work at WQHS penn radio and I'm an avid reader of Eric's blog and I've always seen you commenting even back in the days when it was ripcord. Is there any chance you might agree to letting us use this review for WQHS's blog? It's really fantastic. I'd copy it exactly as you have it written and sign your name at the bottom of course.

Let me know please! This is so much better than Spin's review. My name is Tanya and my email is tbogin@sas.upenn.edu. Please consider!

it just reminded me the first time the Strokes played in Mexico city in 2002, when "is this it" album was released.


Such an unforgettable show!

"4. Be grumpy, yell, mutter to yourself that this is the last time you try to be up front at a Strokes show and yell some more."

This reminds me of how I felt at one of their shows in 2003. But of course I always forget by the next show and make sure I'm up front for The Strokes no matter what!

Your glasses are bent.

You're So Right was so much better live than I ever could have imagined. Besides the lame crowd the show was amazing. Your review is awesome

Great review Hanan. I'm glad I'm not the only one who thinks Gratisfaction sounds like Thin Lizzy.

I suffered a freak attack before the strokes came out and I had to move to the side (I was in front)but even after being shoved around the show was amazing. THE STROKES WERE AMAZING! But nothing compared to Friday night when I met JULIAN!! He was awesome! FJDHFHSKDJFHKHSD!! I was literally speechless. :)

I've never been to a concert because everything is 18+ :/ but it sounds both painful and amazing (:
Great review.

Ahhh I love that you were there, sounds amazing! And as ever, I'm loving the little details. Hoping Devendra's gonna be supporting when they get to the UK. Glad you had a good time :)

Thank YOu!!! FINALLY a good, SOLID review of the boys on Saturday. They BROUGHT it alright! EVERYONE stepped up their game, and it SHOWED The music was just so ON POINT!!!!! It just goes to show, somethings ARE worth the wait!

Hey. Thx for the pics. If you still remember us, we were standing right next to you while waiting for the concert to begin who happen to be from SJ too. :) Was great fun talking to you. <3 Susie & Esteban

They are not so bad after all, I do prefer more heavier or more groove metal, but this guys are ok.