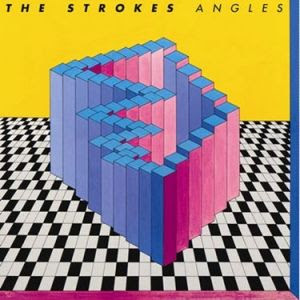 Nikolai Fraiture, the bassist for NYC band and world-dominators-in-progress The Strokes once referred to Angles as the album which should have been released between Room on Fire and First Impressions of Earth. I never really understood what he meant until I had listened to the album a couple of times. Sonically speaking, the band’s first two albums, including their universally acclaimed debut Is This It are more classic, with muffled production and an old school vibe, mixing upbeat and down tempo tracks to a delightful and continuously revisitable listening experience. First Impressions of Earth, however, jumped very far from ITI and RoF and this essentially impulsive leap baffled critics and fans alike, garnering harsh backlash for the band once dubbed “the saviours of rock and roll”. But how was FIoE different, really? It was the band’s most cleanly produced album, but more than that, it featured both incredibly aggressive tracks like the bass-heavy “Juicebox” and the Eastern-sounding “Vision of Division” as well as a handful of calmed down tracks including the mellotron-driven “Ask Me Anything”. In other words, it strayed too far, too quickly, from the first two albums, which Rolling Stone had called “perfect twins”.

Angles is The Strokes’ first collective release in five years (during which time the band members released a total of five side project albums) and it shows that frontman Julian Casablancas really has taken everything leading up to its release to heart. What critics said, how fans reacted, and more importantly, what the rest of his band thought and wanted. Angles starts off with two incredibly catchy songs, kicking off with the beat-drenched dance floor/lady-of-the-night anthem “Machu Picchu”, and the “Under Cover of Darkness”, the album’s first single with undeniable, crossfire guitars and the best chorus that anybody anywhere has heard in years.

But then the album slows down to the in-betweenness that Nikolai had mentioned, both regarding production quality and content. Angles seesaws between in-your-face intensity (“Metabolism”, “Gratisfaction”, “You’re So Right”), and mellow groove tracks that oddly combine Julian’s obsession with soul music and 80’s New Wave music. At one point, during “Two Kinds of Happiness”, Casablancas channels Ian Curtis so thoroughly, it’s slightly disconcerting, especially because he tackles ambitious falsettos in other tracks. But out of the ten songs here, that’s the only track I have issues with. And it’s growing on me.

“Call Me Back” is one of the best tracks on Angles, building slow vocals over a simple guitar progression. “Wait time is the worst”, oh yes it is. The song dazzles and hypnotizes, just as Is This It worthy album closer “Life is Simple In The Moonlight” does. “Taken for a Fool” is the coked-out brother of the pothead “12:51”, racier, skankier and less prone to fascination with shiny objects. “I hope this goes over well on the toxic radio”, Julian sings. “Monday, Tuesday is my weekend.” In other words, fuck it. The Strokes are back, and they’ve finally reached the level of confidence and stability to properly channel their creativity without roller coaster ups and downs. Because in the end, more than anything else, Angles is a fresh, interesting record. It’s not like anything else out there today and proves that no matter what you say, you still care about The Strokes. Everyone does. The Strokes don’t matter because they’re cool or wealthy or handsome. The Strokes matter because, in a world filled with posers, pricks and pop music that is genuinely crap, they manage to salvage that thing that we turn to for hope, inspiration and solace—music.
Posted by Hanan at 10:39 PM

That was a DAMN GOOD review!!

Kudos to your review. Well thought out but also quick-to-the-point.

"they manage to salvage that thing that we turn to for hope, inspiration and solace—music." Really really nice review, you really hit the nail on the head. It's a beautiful album.

i absolutely love the strokes. they are one of my favorite bands ever. that said, i do not like this album at all. i think the only great song on there is taken for a fool. aside from that there are two or three others that are above average. everything else is sub par. is it because 'par' for the strokes is a crazy high standard? maybe so. but i don't see how you can call this a good album. i get this is a strokes blog and a lot of established strokes fan want to apologize for them, but can we get real?? this album is just weird for them. and weird doesn't have to be a bad thing! phrazes was weird, but it's also awesome. this is just weird and uninspiring.

This is a really good review. Very descriptive.

Great review! I love what you said about "Taken For a Fool"... have you gotten a chance to see the video for it? I thought it was really cool.. http://www.vevo.com/watch/the-strokes/taken-for-a-fool/USRV81100040

thanks, charlotte. yeah, I've seen the vid and I quite enjoy it =)