Band of the Week: Blackmarket 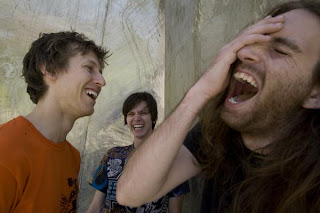 The members of Blackmarket hail from Lake Havasu, AZ and they have been writing songs together since their formative teenage years. When a band has been together since youth, it usually means one of two things: they are hopelessly stuck in adolescent hindsight and amateur songwriting or that they have impeccable chemistry and enormous potentials for growth. Luckily for us, Blackmarket falls into the latter category. Mixing Brit-pop darkness with American eagerness, the band delivers its effervescent tracks in the vein of a scratchier, less whispery Elliott Smith. Some of their songs echo early Coldplay (“To Say The Least”), but the majority of the tracks are the hyperactive, indie-dance club type. The young band is not afraid to push boundaries, throwing in George Harrison inspired experimental guitars here and there. The band joined forces with Sean Slade (Radiohead, Dinosaur Jr.) to produce their debut album, Elephant in the Room but are now supporting their second LP, St Vincent Décor, a fantastic collection of quasi-pensive Mando Diao-esque songs that pack a whole lotta punch into a few minutes.

You can stream the whole album at their WEBSITE

Visit them on MYSPACE

Blackmarket - Tongue Twister Typo [mp3]
Posted by Hanan at 11:04 AM

Labels: band of the week, blackmarket