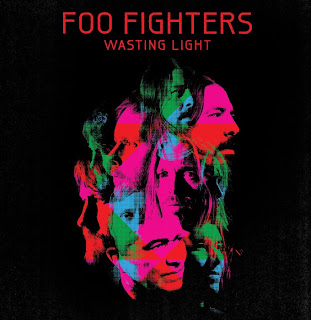 When Nirvana’s career reached its untimely end in 1994, nobody could have imagined what would spur forth from their shaggy haired drummer, Dave Grohl. But not only did Grohl end up being the Nirvana member with the most longevity, he has been and remains to be one of the most consistent musicians of the last two decades. Dave Grohl started Foo Fighters as a way to play the music he wrote six months after Nirvana frontman Kurt Cobain took his own life; Foo Fighters have since evolved from their grungy roots on their eponymous album to the mostly rollicking, (albeit oftentimes sentimental) and ever so recognizable brand of rock they’ve been producing since 2002's One By One. Since releasing 2007’s Echoes, Silence, Patience and Grace, Grohl had collaborated with Led Zeppelin’s John Paul Jones and QOTSA’s Josh Homme as the melt-your-face bona fide wetdream of a supergroup Them Crooked Vultures. However, on Wasting Light, Grohl abandons the hard rock vibes of the side project (with the sore thumb exception of “White Limo”) and returns to the alternative roots which he found and became comfortable with in the early middle stages of his band’s career. “I never wanna die”, he screams on “Walk”, a song whose chorus is reminiscent of “Learn to Fly” and other early Foo songs. The album’s first song, “Bridge Burning”, opens with “These are my famous last words!” the first of many clichéd lyrical themes found on the album. The song, however, is just as energizing as its predecessor, “The Pretender”, filled with all of the right kinds of rock’n’roll anger; overall, “Bridges Burning” and the songs which follow it are musically superb, especially when judged by the applicability of their on(festival)stage badassery. Wasting Light was recorded using analog equipment in Grohl’s garage, which serves as an obvious statement to how Grohl feels about the industry itself and his eternal loyalties to his roots. Regardless, the album just begs to be amplified to thousands of eager fans in a huge setting. Lead single “Rope” sounds exactly like what you would expect a Foo Fighters single would sound like. Throughout the album, the drumming is tight, the guitar riffs go BANG-BANG-BANG like lightning bolts of alt-rock glory, and most importantly, Grohl’s songwriting and delivery are nothing short of excellent. Foo Fighters’ essence and appeal lie in their consistency of sound throughout the years, and Wasting Light only falters when Grohl defiantly departs from their tried and true sound, like in the metal-esque “White Limo”. Some people write Foo Fighters off as a band who writes the same album over and over, however this assertion is misguided and reductive. Foo Fighters have perfected a certain post-grunge sound and continue to reinvent it in every album they release, providing rock-lovers with triathalon-training music that always manages to sound comfortably familiar yet electrifyingly ground-breaking.