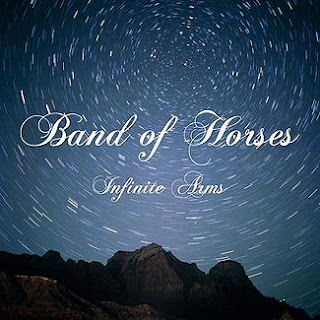 Band of Horses have come a long way since their 2006 masterpiece debut, Everything all of the Time. The South Carolina band, originally from Seattle, retained their sweeping flourish of a sound well into their second album, Cease to Begin (2007). With this third LP, however, the band’s lineup has finally solidified, but the music has disintegrated. The starry album art for this new record would have been better utilized to express their earlier music—the songs found on this new offering do nothing to provoke the soul, let alone in the astral sense which you are misled lies within. Infinite Arms is a surrender to the mendacities of middle age—the oh-too-soft songs are like a testament to mediocrity and Bible camp. Half of the time, it sounds like a poor man’s Wilco via your grandmother’s weathered hymn book. The underdeveloped, cabin-recorded style is so far removed from the powerful songs that dominated their first two releases—there is no magic, just pitfall upon pitfall. There is a surplus of harmonies and none of them are anything remotely spectacular. If Ben Bridwell has any sense, he will get his ass back to the Northwestern coast and quickly, else he and his band fall by the wayside, just like the drippy songs found on this miserable excuse for a record.