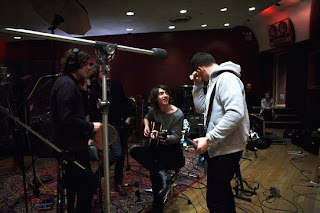 two weeks and a day after my twentieth birthday, my very favourite British band of the modern era (and probably my [current] third favourite band of all time, after The Strokes and The Clash...well, maybe fourth after The Smiths...) will release their much anticipated third album, produced by Josh Homme of QOTSA and James Ford of Simian Mobile Disco

I don't know if you saw this yet, but it has a couple clips of the new songs:

yep, Jackie, I've seen that XD
I am so excited about this release. it'll probably leak around my birthday. last year, my Ben Sollee CD arrived on my birthday, which was awesome, I got to spend the day listening to great, new music =)